By Cordy - May 22, 2019
I used to be a cynic on whether prayers work for a long time. I used to rely on my own strength rather than onto others because I had a strong belief that people disappoint you. It was best to rely on oneself more than onto others. Truth be told, I was afraid to be hurt. To place my vulnerability in other's hands.

I have made prayers that was manifested.

Each time I got overwhelmed with worries over Patrick, I would experience below:- 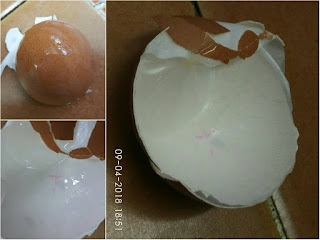 Cross in the egg, taken by my mobile.

Sometimes I would be the one who unknowingly gave answers to someone else's prayers.

One day during meditation and prayers, I suddenly have a strong feeling to present a gift to a lady whom I am not familiar with. I could not understand why. The feeling was very strong.

I have been buying some items from her shop. Her shop having a sales event. I met up with her, told her I felt like giving her a gift. Her eyes stared in surprise at the gift I gave her. After placed my gift onto the counter, she paused and said, "this confirmed what I am doing is right."

Then she walked away to attend to some customers.

I was stunned. I could have just walked away. Curiosity decided to lead me instead.

I approached her after she was done with her customers. I had a sudden thought. I wondered.

"Did you recently pray to God for something?"

She looked up to me and said, "yes. Your gift gave me the answer to my prayers. That I am making a right decision."

That right decision was on making a big career change.

In another experience I had this year when I unknowingly gave the answer to someone's prayer. One lady shared with me that she was desperate for financial stability. For the past two months, she was unable to make much sales. She shared of her worries to God.

Unknown to me of her situation, I made some orders from her. The items were in relation to encouraging mothers especially. The next day during meditation and prayers, I suddenly felt a very strong feeling to increase orders with her. That I am to give these additional ordered items as an encouragement to other groups. I decided to listen to that instinct.

When the seller and myself have an opportunity to talk on this matter, she shared with me of her financial difficulties due to poor sales. That she prayed to God. She did not expect to receive a big order from me suddenly. She thought aloud whether I was rich.

I told her that the expenses were sponsored. That so long I do of work of a charitable purpose, it shall be fully sponsored by my friend.

This seller shared aloud that my big order then contributing to her daughter's education. I was surprised. I did not realise it made such an impact on her.

I had personally seen my friend's son life turned around, supported by many prayers of different religious faiths and those who sent positive energies. Her son was dying in the hospital. The doctor could not diagnose what was the problem. They told my friend to expect his death.

My friend shared later there was a sudden slight reaction to her son's condition. The doctors did take note of it, but still prepare my friend for her son's death. She refused to accept that idea and requested us to continue praying. Prayed hard we did. Her son slowly get better despite what the doctors' assessment.  Suddenly with some extra time, the doctors discovered that the actual diagnosis of her son's deteriorating condition was leptospirosis. With the right diagnosis, the appropriate treatment were given. Her son eventually recovered and in good health today.

Yet based upon my experience, does it mean prayers usually work? Years ago I knew a friend who promised to be a full time vegetarian to God if her brother fully heal in ICU. He was unconscious. He died. She did not blame God. She was thankful that her brother's suffering has shorten although he did not live as what she prayed for.

Some would lose faith. Some doubted the existence of God. Some became angry and go why me. Why my life? Why must the others prayers manifested and why not theirs??

I don't have answers why sometimes God appear to manifest prayers and in some not. I am not God. In the support group, there were many who prayed for their babies but some died. Some survived. The one thing that struck me was these parents never blame God for their babies' deaths. They expressed their grief and thankfulness that the suffering have ended.

To me, my son is a blessing despite his health challenges. My son has changed both myself and my husband for the better despite worries. We have become more understanding, empathic. We saw much suffering yet we kept seeing courage, faith, hope.

I admit there were times my faith was affected on my journey with Patrick. I wrote of this experience in one article entitled Faith. I decided to accept the possibility of Patrick's death. Instead of focusing on fear of losing him which would lead to a vicious cycle of unhappiness and negative emotional turbulence. Why not focus on appreciating Patrick is still with me now. Why not focus how much joy and happiness he brought into my life. Even if Patrick have a short life, I have his legacy - his photos, videos, this blog and more.

That does not mean I am to give in to the circumstances. On the contrary with the acceptance of the possibility of his early death, it makes it much easier to move forward. I will do all I can, fight for you, Patrick. No matter what, I do what it takes to save your life. I don't want to have any regrets.

In this instance, I pray to God; although miraculous cure would be nice yet if there is none offered, then what I prayed for is ...Time. Time to do what we can to save his life. Sufficient funds to come in for the surgery. Whatever obstacles that is delaying our arrangements to be minimised.

God, please give us courage, faith,strength, clarity, hope and trust. If my son ever survive this, I promise You I shall pass it forward for ALL the kindness I have been receiving from humanity. I promise. This is my word to You.