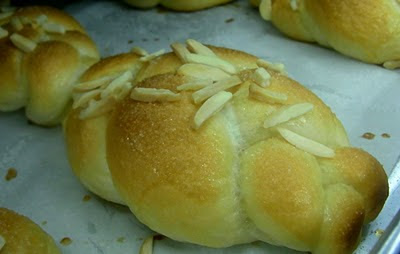 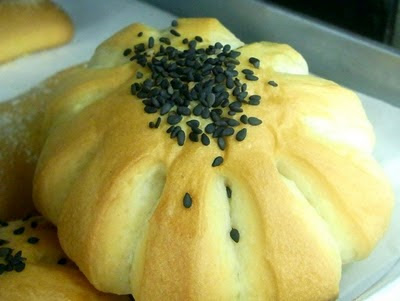 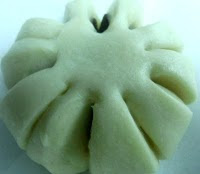 I used to fail in making bread of any kind.

The dozens of recipes I've tried yielded no results and at one point, I lost interest altogether. Seeing my mom kneading the dough and sweating all over only confirmed that bread making was a tedious and laborious effort.

Besides, why fret when bakeries can be found almost anywhere, meaning buns or artisan breads were only a drive away. So I gave up bread-making and stick to store-bought bread. The mixer I had was only meant for cakes and cookies.

And the dough hook sat in my kitchen drawer, spotless and untouched.

Something hit me one day. The smell of that wonderful aroma of bread permeated my entire kitchen, not once..but often. My neighour was baking bread...and I, being her sweet and loving neighbour surely got my share.

Buns of different shapes and fillings, soft white sandwich loaves, and my favourite, the 'paung bakar', the local buns, baked traditionally using woodfire and coconut fibre. Her secret: she went for classes.

Bread baking classes. And she started selling home-made bread ever since. Now why didn't I think of that.

So there I was on that very night, googling for classes venues and schedules. I went for my first lesson...pretty intimidated by others at first. The next year, I went for my second class and a year later, my third class.

I simply hunkered down and practiced everything about bread baking I learned (still have a lot to learn)...And bread baking now has become a routine (almost every other day). And the family's favourite? Sweet bun, sandwich loaf and baguette.

I would leave my Kitchen Aid to do the bulk of the kneading. And I have little hands to help me shape and fill the buns. So bread making now is fun indeed.

Divide dough into 40g, round, fill and top each ball before spraying it with plain water (to prevent the outer layer from drying out)

For the red bean bun - flatten the round dough and fill red bean paste in it, round it again. Flatten the ball a bit with your palm and using scissors, make ten strips on the edges of the ball.

For the almond and sugar bun - Divide the 40g dough ball into 3 equal parts. Roll each part into 6 inches long. Plait. Sprinkle with sugar and toasted slivered almonds).

Preheat oven to 190C. Bake for 8 - 9 minutes or until the buns turn golden brown. Rotate the tray halfway through baking if necessary for even browning. The same recipe can be used for sausage buns.