Chadian Women and Food as Enterprise 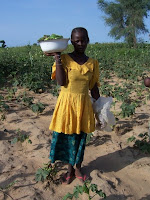 My friend Zhu Jun and I have spent the past few weeks exploring his experiences as a Peace Corps Volunteer in Chad and I wanted to share the final post with the eHomemakers community. (If you'd like to read the full series, you can check it out on my blog.) While there are few business opportunities traditionally open to women in Chad, many have managed to carve out a niche for themselves selling food and drink. Here's Zhu Jun's take on things:

The vast majority of women in Léré and rural Chad are bound by unspoken gender rules that limit the types of entrepreneurship women can engage in. This generally means entrepreneurship for women in Chad is limited to serving food and drink. In streets near transportation centers and well-traveled roads throughout the country, women and girls hawk snacks including fried bean fritters, Chadian doughnuts or beignets, beans and rice, seasonal fruits, palm nuts, grilled chicken, grilled or fried fish, and packs of water.

Grown men who are not yet married and are thus lacking households of their own (i.e. women to cook for them) often go to "restaurants" run by women, usually simple places where women serve the Chadian staple of okra sauce and boule. In larger, wealthier towns, women and their families may own and operate restaurants that serve more expensive foods such as grilled chicken or fish, French-style baguette sandwiches, or even juice smoothies, made from blenders dating from the '80s that are powered by gas generators. (These smoothies were colloquially known as "Amoeba Juice" by us Peace Corps Volunteers because, although tasty, they were made with unpurified, contaminated water and one would almost certainly contract amoebiasis or giardia and suffer the runs as a consequence.)

But not all food service-related enterprise is created equal.

Bars, or the rural equivalent of bars, are one of the most common and popular informal businesses run by non-Muslim women in smaller towns and villages. The local, home-brewed alcoholic beverage in Chad is known as bili-bili and is fermented from the locally-grown grains, usually sorghum or red or white millet, sometimes maize, or even a mixture of these. Bili-bili is the drink of the people, made from cheap, easily available ingredients. It is also much more affordable and popular than either of the two Western-style bottled beers produced in Chad, Chari or Gala.

As soon as the sun goes down and the oppressive heat of the day dissipates, groups of women, usually relatives or friends working together, begin to make the bili-bili, boiling vast pots over large wood fires. Doing this at dusk helps women avoid working around the large, hot pots during the extreme heat of midday (the cooler, earlier part of the day is reserved for the manual labor of subsistence activities), and provides light, warmth, and a common activity in a town almost entirely without electricity. Once the bili-bili is fermented and ready, usually after several days, it is transferred into large basins and taken to sites all over town by each group of women. The women sell copious amounts of this very cheap beer (half a calabash costs about 100 CFA, or approximately 20 cents) and they share the profits, costs, and labor.

During the afternoon after work, men (and the occasional woman), disperse to these informal "bars" to drink, relax, and socialize. Muslims, who typically abstain from alcohol, gather at tea bars to indulge in syrupy sweet shai akhadar (green tea) or shai amar (red tea). The drinking goes on until the early evening and then, one by one, the drinkers disperse, returning to their homes or going into town.

First, the positive: Drinking bili-bili serves as a cheap method of stress relief, and as a social pastime, it can help to strengthen and maintain relationships. Interestingly, imbibing the homemade brew also helps nourish Chadians who have a very limited diet. Bili-bili contains high levels of protein, minerals, and vitamins which poorer Chadians would otherwise not get from their daily food. The nutritional advantage afforded by the liquor is recognized by Chadians who often and enthusiastically explain, "Ça donne la force!"

Now, the negative: As with small towns in America, one of the factors driving drinking is a lack of other recreational activities and methods of relaxation. This boredom, coupled with an extremely harsh physical environment, the constant possibility of violence, and no laws or restrictions on drinking age in Chad, has resulted in a unhealthy and entrenched drinking culture. There were extremely high levels of alcoholism in town (estimates were in the double digits) and, unfortunately, there were regular incidents of violence against women, children, and, of course, other men.

- During my first site visit, there was a commotion as individuals reported to and from my host father, a local chief and a member of the royal family. Apparently, one of his sons, a host brother I hadn’t met, had gotten into a drunken argument with a man and demanded the man's sunglasses. When the man refused, things got physical, and the host brother pulled out a knife and stabbed the man to death. Then, my host brother put on the sunglasses and continued strolling down the street. He was later detained at the jail but was reportedly still so inebriated he didn't understand what was happening to him.

- A young male relative of my host father would visit me often at my house. When he was sober, he was helpful, polite, and serious. Often, however, he would stumble into my living area barely able to stand or walk, his eyes glassy and sometimes even rolled back into the sockets, and alternating between mumbling to himself and making aggressive yet incoherent statements. The boy was only seventeen, but he was frighteningly drunk on a regular basis.

While making and selling bili-bili can be an extremely lucrative undertaking for women, its numerous negative consequences - many of which impact women directly - make me question the mantra that all enterprise is good enterprise.

I do think that supporting women's ideas and businesses in the developing world is often effective in raising their standard of living, increasing educational opportunities (particularly for their daughters), and affording women a measure of financial and personal independence. That said, women in the developing world must also negotiate a complex social and cultural framework and it's important to realize that economics and entrepreneurship are not the silver bullet in every case. Very often, a raised profit margin isn’t enough to ensure the safety and better lives women seek for themselves, their families, and their communities.