Examining the crusted brown flakes closely, my sister exclaimed, “they looked like KFC’s hot and spicy”. She was referring to the famous franchise restaurant chain.


Part of me felt insulted being compared to fried chicken. 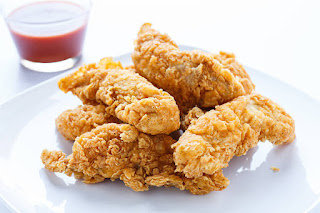 In my view, they bear a closer resemblance to the fried banana fritters that I used to eat in my childhood days.


It was nearly the end of the year 2016, after certain parts of my wounds healed, my skin became dry and were flaking off. The sight of the dried flaking skin would deter my sister from eating at KFC for a long time.


There was a point when I was flaking off a lot of dry skin until my sister suggested that she should collect them and make some weird artwork and framed them. She informed me about an artist who collected fish bones, made them into art and sold them for lots of money.


I rolled my eyes, “Yeah, and who will buy? They with MRSA or other bacteria.  But then again, it would have been a unique artwork.


The nurses would sometimes apply baby oil or liquid paraffin on the skin before bandaging while making sure it doesn’t touch the wound area.  I used moisturiser of various brands as recommended by the plastic doctors.


Later, my sister researched on essential oils and decided that it would be best if we used more natural oils on my skin instead of synthetic oils. That began the start of her journey of concocting a mixture of oils for my skin. We first started with coconut oil as a base oil combine with some essential oils like lavender and tea tree oil. She was careful to test the oils individually to see whether there was any adverse effect on me. Luckily, there were none. We found out there were many types of oils and that the quality of oils depended on the process of extraction. I have even tried oils which I have never heard of before such as and Arnica.

With the vast available on the internet, sometimes it gets confusing on what is good for my skin. Most of the information on burn skin is for the initial burn only. By the time they transferred me to the burn ward, nearly 4 months have passed. The wound areas have turned into ulcers. There were well-meaning individuals who suggested  sort of stuff they read from the internet, but they did not understand that those articles only applied for the initial burns.


My sister got frustrated with all the misinformations and sometimes ridiculous suggestions which she felt was taking too much of her time. I reminded her that these people have good intentions, just that they forwarded stuff without thinking it through. At this age of easy and fast information, people forget that accountable for whatever they send to others.


Misinformation can indeed be detrimental for a burn patient. One of the nurses at the burn ward narrated to me about a patient who applied garlic on his skin after being discharged from the hospital. He read from the internet that garlic is good for skin. He was readmitted to the hospital as the area broke down.


For a burn patient, it is better to stick with the tried and tested products rather than experimenting on the fragile skin. Best to leave the experimenting to a later date when the skin is much more stable.
Rising from the Ashes