Showing posts from July, 2020
Show all 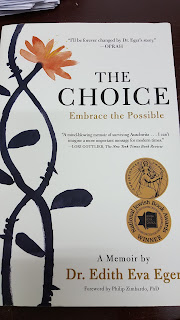 Someone lent me a book by Dr. Edith Eva Eger, “The Choice”. Having already read Viktor Frankl’s book, “Man’s Search For Meaning” years ago, ( see my previous article  Man's Search For Meaning ) I had the curiosity in me to see what this book had to offer or if it was any different from “Man’s Search For Meaning”.       Viktor Frankl was already an adult and a psychiatrist when he was detained in Auschwitz. His book written in 1946 and later translated into English.  In contrast, the Nazis brought Edith to Auschwitz at a tender age of 16 years old. She dreamt of being a ballerina and competing at the Olympics. However, her dreams were crushed as a result of racism and later detention at that horrifying place. Both her mother and father were killed on the first day of arrival.     Many were beaten, tortured and executed. As there were hardly enough food, out of desperation, some had even resorted to cannibalism, eating the flesh of the dead. She barely made it out alive hersel
Post a Comment
Read more
More posts