By eHomemakers - December 14, 2009
When M learnt that she had Parkinson's Disease, it was the most shocking and depressing news she ever had to handle. She felt as if a wall crushed her, and that her life just ended at that moment. It took her several months to accept the fact that the disease was here to stay. Then, an ovarian fibroid was discovered and she had to go for a surgery. We, as her friends, felt very sorry for her, as she had to deal with two blows simultaneously. We thought that she would be even more devastated after the surgery.

However, we were wrong.

M had a complete attitude change while she was at the hospital. She saw how fortunate she was compared to some other patients. Most of all, she realized that her life would be full of anger and grief if she did not start looking at the good side of everything around her. The realization was empowering. She began to appreciate every little thing she saw, heard and touched, no matter how small or insignificant it seemed. 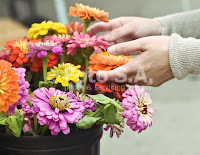 Until now, she still enjoys telling the story of how her mindset was changed by an unexpected event: A few days after the surgery, she was feeling restless and gloomy on the hospital bed. A nurse asked her if she wanted to see the fibroid removed from the surgery. Stunned, she was about to refuse. "How could I look at the ugly thing that was bothering me?" Then she thought, "What would I lose if I took a peep at it?"

The fibroid was duly brought to her in a Milo tin! The hospital staff was quick to tell her that it was the biggest fibroid they had ever seen and that was why they had kept it in the tin with preserving solution. They were so excited that they gathered around her bed commenting about the fibroid.

"It has shrunk to half its original size!" M thought this comment from them was the funniest. She started to laugh for she never knew until then that a fibroid could generate so much excitement.

"The staff crowded around, waiting for me to be impressed with the fibroid. They pointed out to me that the bit sticking out at the side was twice as big while it was in my abdomen. I told them that this explained the sexy bulge I had on my belly and why I could not wear tight dresses for years. They laughed. One of them turned the tin around for me to have a good look. I asked, "Was this cute, round thing really part of me?"

"The way I asked must be really funny for the staff had a good laugh."

After that day, M felt as if a burden had been lifted off her. If she could enjoy looking at the fibroid, she could enjoy other things too. The change in her outlook began to make things easier for her.

When she had to be shifted to a less comfortable room, she did not complain. Instead, she learnt to enjoy the people and the surroundings.” I loved the noise, laughter, giggles and instructions! Six of them got into the tiny room with me. I laid on my back, looking up at six exuberant, beautiful young Indian women chattering and laughing in Tamil and English."

The new room was on a busy floor. M remembered fondly, "It was the floor where all the action was. I knew when the shifts were changing as there would be a sudden swell of cheerful exchanges around me. When I started walking around, I would go to the nearby maternity ward to look at the babies. Several times people asked which was my baby!"

To keep herself further amused, she looked out of the window. "I could see the street activities. Just across the road, a new building was going up. The workers liked to eat their lunches at a specific spot. Two women washed their clothes every morning over that tap." She managed to find stories, humour and inspiration from simple, mundane happenings. 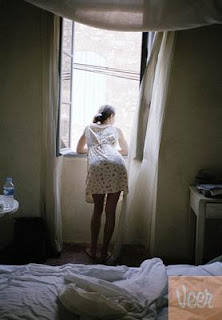 She saw that the world outside of the hospital was a world away. If she did not go out to explore the world outside because of the Parkinson’s Disease, she would turn into a recluse, knowing only the limited space in her self-made cocoon.

When she got out of the hospital, she went on adventures in town and overseas trips on her own. She walked, took public transportation and spoke patiently to people from all walks of life. Many good things about people were revealed to her. She found that everyone and everything contributed to her enjoyment of being alive.” In a sense, I'm living my life fuller and knowing more than before," she concluded.

We believe that her positive attitude has delayed the onset of certain advanced symptoms. She is still keeping herself very busy through gardening, writing, painting and travelling. Parkinson’s patients at her stage of the disease usually stay home and quietly reconcile themselves to a reclusive lifestyle.

"I don't know how long I'll be around. But while I'm still breathing, I'll laugh, dream and do as many things as I can." These were her last words before she went on another long tiring journey.
Life Matters