By Cordy - November 23, 2019
It has been almost half a year since my last blog. There were many moments we have experienced as  a family. The good times, the worrying times. The blessings and gratitude.


We reached Renji Hospital, Shanghai, China in the middle of June 2019. We stayed for almost 6 weeks; from preparation for the liver transplant surgery, surgery, ICU and recovery stage.

Patrick's surgery scheduled on 2 July 2019. The surgery was successful with no complications. Immediately after the surgery, they send him to ICU. After almost a week, he was discharged to normal ward.

We get to observe his progress in the ICU by the doctors' daily photo taking to us. Seeing his face made us feel comforted. There were moments I am concerned Patrick will get scared to where he was and that he may have thoughts we abandon him. I prayed for his safe recovery in ICU, hoping it would not be too long. I have heard there was one baby after his liver transplant surgery who needed to be in ICU for two weeks due to complications. 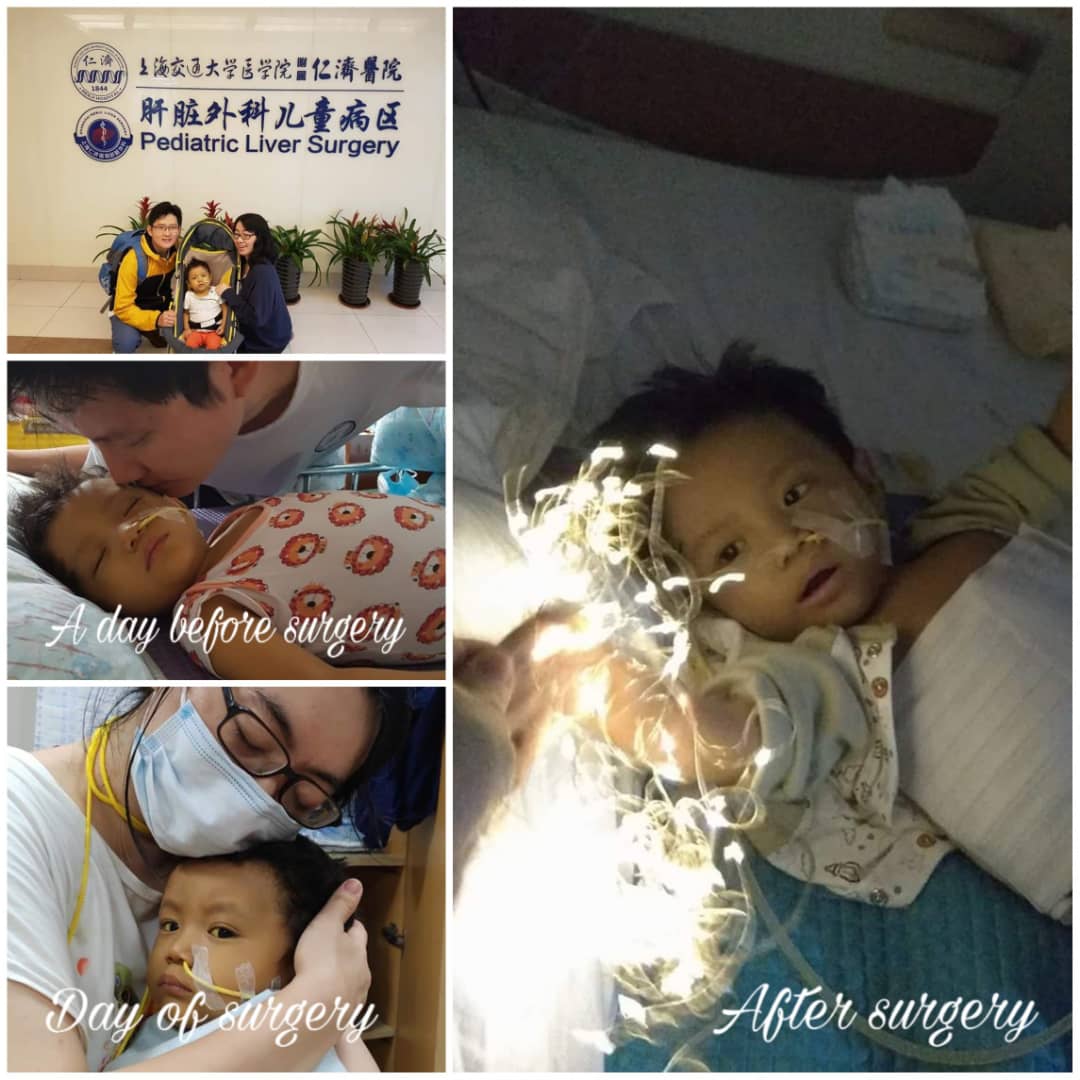 Patrick's emotional state was not in a good positive manner unlike before transplant. He was moody, unhappy and bored. To uplift him, I would sing to him often. I would try to be comical to make him laugh and smile. I would read to him. I would try many ways to make Patrick feel safe, comforted especially to let him know his parents is with him throughout this discomforting period. Often I assure Patrick that once he gets better, we will return home. Please be patient, I often tell Patrick. His eyes have full of questions. We would try to explain in the simplest manner that this pain he is experiencing is to save his life. That it will get better with time. That one day he will understand when he grows up.

It had been an intense and emotional experience for the three of us. I have never seen both my son, Patrick and my husband in such a vulnerable manner after the liver transplant. My husband was the donor. My husband took a lot of courage and endurance to overcome the pain of recovery as the liver donor. My husband took almost a week before he can stand up from the bed and walk once more. I understood the surgeons removed less than 20% of his liver to Patrick. The surgeon informed him that his liver shall grow back in six months' time. Liver is the only internal organ which can regenerate itself.

It was a life changing experience for him. If you ask him whether he would do it again to save Patrick's life? He will say yes.

The doctors revealed the liver removed to be "at a very bad stage", which the doctors termed it as the end stage liver failure. Without this transplant, Patrick would unlikely to live to his second birthday on October 2019.

During his recovery in the normal ward, he suffered diarrhoea and bad nappy rash for almost two weeks. After he fully recovered from this, Renji Hospital finally discharged Patrick to return home!

Once we returned to Malaysia, Patrick have to admit to the hospital for further evaluation to ensure no liver rejection.

For two months plus, his medical checkup was weekly. Afterwards, every two weeks until today.

In between these appointments, there was a period  his platelets kept dropping continuously  from 140s to 45 within 1.5 months. The recent medical appointment showed it has climbed up a little. The doctors believed the reason for this low platelets was because of the medication effects. If his platelets continued to drop without stopping, Patrick's medication may need to be changed.

Patrick is currently on daily medication with the purpose to suppress his immune system. Otherwise chances of his liver rejection will happen. I would share further in subsequent blogs on Patrick's progress and what we have been up to since my last blogging.


When Patrick is on his recovery from his transplant, his yellowed eyes were the first to go. Then his jaundiced coloured skin disappeared in stages. His stools no longer have that pale-ish colour and become darker brown today. He no longer itches daily. His abdomen no longer looked swollen; it was so before transplant because of  his enlarged liver and enlarged spleen which pushed against his intestines. He has become even more active and talkative than before. One of the biggest change is his recovery from flu and cough. Before the liver transplant, it would take him on average 10 - 16 days to recover.

I remembered there was one time in January 2019 when he recovered from one bout of flu and cough in almost three weeks. He recovered in a day or two and then he caught another strain of coughing from my husband which took slightly more than a month to recover. During this recovery stage, his weight was dropping because his cough caused to regurgitate. Recently  this month he caught flu and cough. It took him less than 6 days to recover.

Before I end this blog, I would like to share the difference in my son since the liver transplant as follows:-

To those who have been praying and donating to Patrick's liver transplant fundraising, thank you very much.


Your contribution has saved my son's life.

I am grateful, thankful and feeling blessed.


Wishing you good blessings and a good weekend.
unexpectedliving