Around 8 months in the hospital, my body was still weak and my legs were still painful but I was starting to be able to stand long enough to be transferred to a wheelchair. One evening, my sister put me on the wheel chair to visit the nearby convenience store located at the hospital.


As she was about to leave me outside and enter into the store alone (the store was narrow and filled with goods, hence it was not convenient to bring the wheelchair inside), a tall Malay boy in his late teens or early twenties came out of the convenience store. Suddenly, he stopped walking and started to stare at me. Then he approached me.


I noticed that his head was misshapen, had stitches and was dented at one side, an indication that he had undergone a brain surgery.


He looked curious, “What happened to you?” while pointing to my head which was covered in bandage. 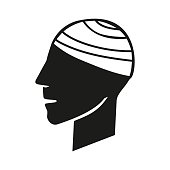 I was startled by his blunt and direct question.


“She was burnt,” my sister replied.
I could feel my sister was hesitating to leave me with this boy outside of the shop.
Waving my hand towards my sister, “Don’t worry, I will be OK. You can go in.”
However, my sister was still in a protective mode.
Before entering into the shop, she gave a warning to the boy.
“You can talk to my sister but don’t touch her, there are a lot of germs.” She was not actually trying to scare him, I was having MRSA infections (a type of super bacteria that is resistant to common antibiotics) every now and then.
I narrated to the boy about the gas explosion. He then asked, “How long have you been in the hospital?.”
I replied, “Around 8 months.”

Suddenly, I could see tears coming out from his eyes falling to his cheeks.
“Don’t cry.” I said to him without thinking and started feeling emotional myself.
I then asked, “How long have you been in the hospital?”
Wiping his tears away, “3 months” he answered.
At that moment, there was a short silence.
Although our sickness and pain may not be the same, it felt like there was a sharing and bonding between us, a connection of suffering between 2 strangers.
Trying to comfort me, and also perhaps comforting himself, he said, “have patience”. At the same time, a woman came out of the convenience store and he quietly followed her.
A person who has suffered is able to relate and show empathy towards those who are suffering. I find this true in hospitals, especially among the patients.