On the 02/01/2019, we went to Penang Hill. The last time I came here was 7 years ago. We arrived at the foot of the hillside at 6.35am and managed to ride the first funicular train up that morning. As the train reached the top, the sun was rising.

It was cold and chilly but the view was breathtaking with a myriad of colours. 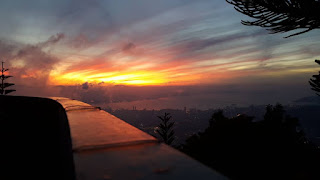 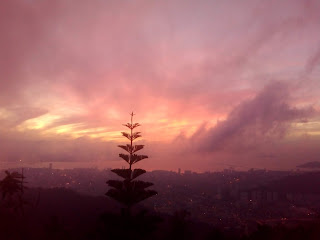 Views on top of Penang Hill

We explored the area and took photos. Later, we walked through a track which my sister proclaimed, was a shortcut back to the train station.  As we were trudging along the way, the passage became steeper and narrower.

As my feet moved towards the sloped down cemented pathway, hesitation arose within me.

How far is this trail? Will it become steeper? Would the path become muddy as we go farther away? Doubts were encroaching my mind whether I could reach the destination. I had to reassure myself.

I am going to be OK.
It may not feel like it now, but everything will be OK.
Concentrate on taking one step at a time.

As we were walking, my right hand was holding a cane and my left palm held my sister’s arm for support. 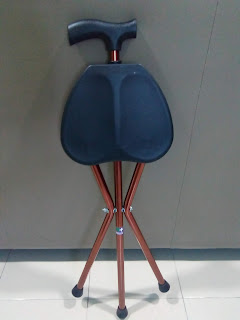 My walking cane. The seat is very useful

“You know, when I was lying in the ICU, I wondered whether I would ever go out in the outdoors or hiking again.” I reminisced to my sister.

Even before the explosion, I was not an outdoor person. Hiking was not something I enjoyed. Usually, I would end up being the last one in the group to reach the destination. However, I appreciated the natural surroundings or going out for walks. Just not the climbing up and down part.

One step at a time.

We hoped that someone could tell us how far we needed to go, unfortunately there were no one behind nor ahead of us.

The path came to a bend, and the main road was in sight. I felt relieved. I would make it out alive!

Yes, sounds dramatic. However, considering that this was somewhat my first hike after the gas explosion,  it was an achievement for me.

For the next few days, I had muscle ache and cramps.