By Cordy - December 31, 2018
One of the most joyful experience I have as a mother is singing to Patrick. I sang to him when he was in my womb. Once he was out in this world, I still continued singing for him. Usually I sang to him songs I have written or created on the spot for him.

He used to just listen. His smiles would be the response for my efforts. Until recently, Patrick started to join me in singing, adding his own voice and tune. And now we can be a singing duo of mummy and son!

Mother & son singing for you,
Expressing our hearts so true,
Angelic singers we are not,
Hoping our voices don't knot.
Loving each moment more and more,
It has not been so far a bore,
For mummy always sing, dance, laugh
One day you can ask for our autograph.
16 Dec 2018
©Cordelia Lee

P/s -  I don't know how to write yet. I will autographed
my fist onto your paper instead. (Patrick)

I love to sing aloud to Patrick by spontaneously create songs for him. His usual response would be with big smiles or chuckles. His body swaying or shaking his head to let me know he was enjoying the moment with me. Below were such special moments when he sang with me.

There were moments when I initiated a conversation with Patrick, he would surprise me by his response.  There were times I thought to myself, was it a coincidence that he responded to me in a way that he appeared to understand me? But he seemed too young to understand my sentence. My logical mind sometimes debated with me.

One example was an experience below. I bought some LED items for Patrick where I used them at night. I would sometimes switched off the room lights for him to admire the lighted LED items. 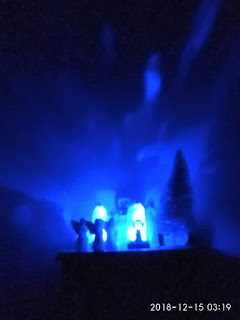 Mother &  son admiring the lights,
So beautiful they are this very night.
In silence we sit,  feeling so  bright.
Our hearts have become our shining guide.
In a second my son turns,
My cheek was touch by his lips.
Thanking  me for this moment,
Yet if not for him, this shall never be.
No need to thank me, my son.
I should thank you for being my sun.
15 Dec 2018
©Cordelia Lee

In another incident that showed his gratitude to me happened on 24 December 2018. I read an article of a mother who had given birth. There were photos of her and her baby.

Patrick stared at the photos closely, looking at the new-born baby that was placed on top of the mother. Noticing Patrick was staring at these photos, I explained to him that the mummy had given birth to her baby. "Like how I gave birth to you."

He suddenly turned to me, kissed me on my cheek. Then he continued his attention curiously on the article. I was stunned and felt sweeten by his gesture. Was he showing me gratitude? It was the first time he saw such photos.

Patrick, you are surprising me more and more. I love you, my son.